Photo by Maranda Vandergriff on Unsplash

Every job change requires at least some effort. Have you ever been in situation that you cannot remember some basics at the moment, but you are sure you know it? Do not worry, we all have been there. It is good practice to remind ourselves from time to time about things we know but have lost our minds by absorbing a mountain of new information. So I won't bother you anymore, lets dive into Node.js

Node.js is an open-source, cross-platform JavaScript runtime environment and library that runs on the Chrome’s V8 JavaScript engine (which is written in c++ and is highly performant ) and allows you to create and run server-side web applications outside and independent of the client’s browser. It is written in C, C++, Javascript . Node uses event-driven, non-blocking I/O model which makes it lightweight and pretty fast. It is using single threaded event loop architecture to handle many concurrent clients.

What are major benefits of using Node.js

Nodejs has a handful of advantages but we will list only the most prominent ones:

How many types of API functions are there in Node.js

There is two types of API functions:

What is node REPL

NPM represents two things: 1.) it is and online repository for the publishing of open-source Node.js projects 2.) it is command line utility which allows user to interact with packages and manipulate with them, which means it is used for package installation, version management, etc.

How does Node.js work

Why is Node.js single-threaded

Node.js was created explicitly as an experiment in async processing. This was to try a new theory of doing async processing on a single thread over the existing thread-based implementation of scaling via different frameworks.

Important to note, Node.js is single-threaded but under the hood it is using libuv which is responsible for spawning many threads.

As in official Node.js documentation says:

Blocking is when the execution of additional JavaScript in the Node.js process must wait until a non-JavaScript operation completes. This happens because the event loop is unable to continue running JavaScript while a blocking operation is occurring. In Node.js, JavaScript that exhibits poor performance due to being CPU intensive rather than waiting on a non-JavaScript operation, such as I/O, isn't typically referred to as blocking. Synchronous methods in the Node.js standard library that use libuv are the most commonly used.All of the I/O methods in the Node.js standard library provide asynchronous versions, which are non-blocking , and accept callback functions. Some methods also have blocking counterparts, which have names that end with Sync.

When comparing codes, you can see the difference,for example blocking code:

on the other hand below you can see non-blocking code:

What is event loop 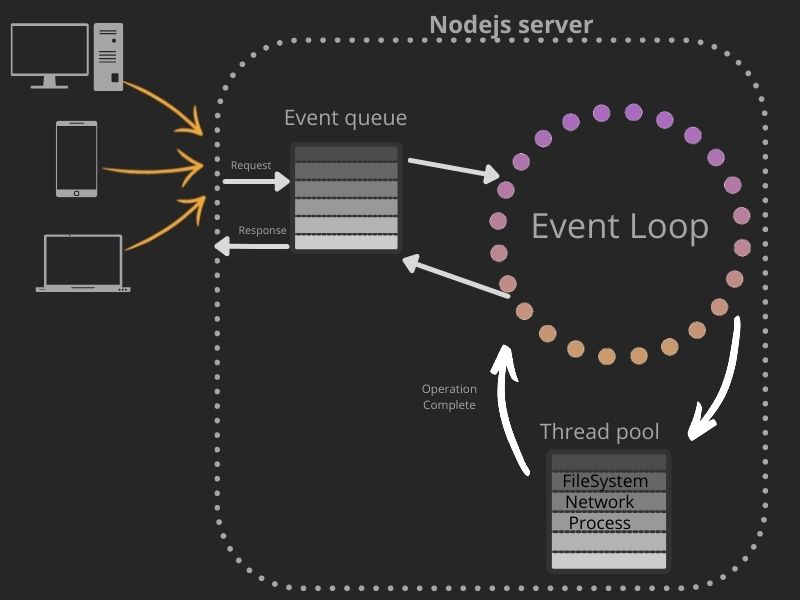 So when an async function needs to be executed(or I/O) the main thread sends it to a different thread allowing v8 to keep executing the main code. Event loop involves different phases with specific tasks such as timers, pending callbacks, idle or prepare, poll, check, close callbacks with different FIFO queues. Also in between iterations it checks for async I/O or timers and shuts down cleanly if there aren't any.

We said earlier that Node.js is single-threaded, but how may we create multiple workers to load of thread if they are not thread ? Answer is libuv, which is special libary built (in the beginning) specially for Node. It is build in C language, uses system kernel which has multiple threads. Specifically, node do not use more than one thread, but libuv is, libuv spawns workers who are in fact threads

JavaScript execution in Node.js is single threaded, so concurrency refers to the event loop's capacity to execute JavaScript callback functions after completing other work. Any code that is expected to run in a concurrent manner must allow the event loop to continue running as non-JavaScript operations, like I/O, are occurring. This is because libuv sets up a thread pool to handle such concurrency. How many threads will be there in the thread pool depends upon the number of cores but you can override this.

What is fork in node JS

Although NodeJS is a single-threaded JavaScript runtime, it can create multiple subprocesses that run separately from each other, allowing you to divide and run your application script from different NodeJS instances.

The child process will have its own memory and runtime instance, so you need to have additional resources to allocate for each child process.

The NodeJS fork() method is a built-in function of the child_process module that allows you to create a child process that’s connected to the main process currently running your code.

Node.js applications run on a single processor, which means that by default they don’t take advantage of a multiple-core system. Cluster mode is used to start up multiple node.js processes thereby having multiple instances of the event loop. When we start using cluster in a nodejs app behind the scene multiple node.js processes are created but there is also a parent process called the cluster manager which is responsible for monitoring the health of the individual instances of our application.

Cluster: Clustering is a way to load-balance incoming requests to your nodejs server over several copies of that server. There is one process on each CPU with an IPC to communicate. In case we want to have multiple servers accepting HTTP requests via a single port, clusters can be helpful. The processes are spawned in each CPU thus will have separate memory and node instance which further will lead to memory issues.

Worker threads are a way for a single nodejs process to offload long-running functions to a separate thread, to avoid blocking its own main loop.

There is only one process in total with multiple threads. Each thread has one Node instance (one event loop, one JS engine) with most of the APIs accessible. Shares memory with other threads (e.g. SharedArrayBuffer) This can be used for CPU-intensive tasks like processing data or accessing the file system since NodeJS is single-threaded, synchronous tasks can be made more efficient leveraging the worker's threads.

Middleware comes in between your request and business logic. It is mainly used to capture logs and enable rate limit, routing, authentication, basically whatever that is not a part of business logic. There are third-party middleware also such as body-parser and you can write your own middleware for a specific use case.

Describe the exit codes of Node.js

Exit codes give us an idea of how a process got terminated/the reason behind termination.

What is an Event Emitter in Node.js

EventEmitter is a Node.js class that includes all the objects that are basically capable of emitting events. This can be done by attaching named events that are emitted by the object using an eventEmitter.on() function. Thus whenever this object throws an even the attached functions are invoked synchronously.